Arsenal boss Arsene Wenger has admitted that Jack Wilshere is hitting form in training as he prepares for his first appearance in the Gunners shirt this season. 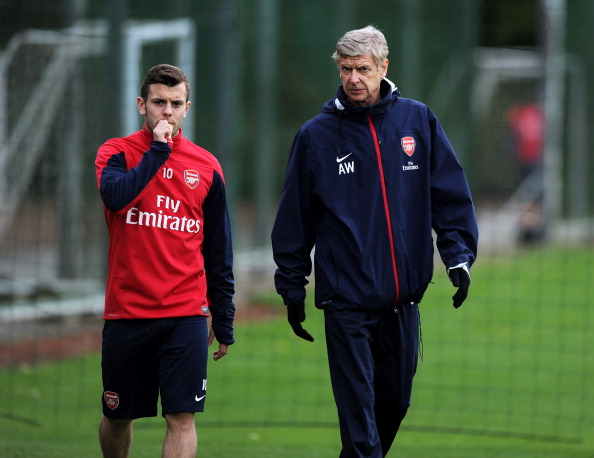 The England international played no part in the club’s pre-season tour of Australia and China as he was recovering from a hairline fracture on his leg.

Wenger has opted to rest the likes of Aaron Ramsey and Mesut Ozil ahead of Thursday’s Europa League clash against Cologne, and the Frenchman has hinted that Wilshere could play a part in the game, he said: “There was always a huge pressure on him to come back as quickly as possible and to expect a lot. He’s on a good way in training. He’s getting stronger and stronger every day, and that’s what we want from him. He was injured at the start of the season from last season, so he was a bit behind the other players but he’s getting better and better. Every game is an opportunity for him and this season’s a good opportunity for him as well.”

Wilshere had apparently received an offer to join Trabzonspor earlier this month, but the Gunners are said to have rebuffed the loan approach from the Turkish outfit. Wenger has previously come in the defence of the Gunners’ graduate, and the manager still believes that Wilshere could forge a career at the Emirates, should he overcome his injury niggles.

The Englishman currently has just nine months left on his existing Gunners deal, and his influence between now and January could give a clear reflection as to whether he has future under Wenger. Wilshere has managed 159 outings across all competitions for the Gunners since making his first-team debut in the 2008/09 season. He has also made a mark with the England national side having netted two goals in 34 caps to date.